Growing up, our little house had a park with a lovely lake in the back. Just down the yard, cross over the road and there it was. I found out much, much later while reading a topographic map, that the lake had a name other than "The Lake". It was called Lake Creighton.
The park was lovely. Flowering bushes in spring...forsythias and lilacs. A "boathouse" made by CCC men during the Depression. Probably the lake was dug out then, too. There was another structure, down by the dam...some sort of pergola and a run off lagoon in stone. Sometimes golden carp could be seen frolicking in the lagoon. There were golden carp in the lake, too. And, most wondrously of all, in spring, fragrant wisteria covered the pergola.
If you were agile, you could climb up to one of the castle-like stone pillars and sit in the shade of that wisteria, hiding from others.
There was a wooden shed on the corner by the boathouse that the parkman used to store his rakes and such. There were three doors in the boathouse (which never in my lifetime had any boats associated with it) that we always wished had toilets. They were locked tight. There was a fireplace inside the stone structure, though. During ice skating weather, it would blaze with a fire started by the older kids. They'd scrounge wood from back yards and once caught the roof of the boathouse on fire. But I was too young to even guess who did it.
Besides, kids from other towns came to the lake. Some called it Willow Pond. I think I blamed them for the destruction there, but who knows who tore things apart and wrote over the walls?
The point of this story is that the whole park was named for a young man from Middlesex who died in WWII...Victor Crowell.
Down at the very end of the park, by the brown bridge, still stands a flagpole where, every Memorial Day, the town would rally for speeches and salutes and hearing the lonesome high school trumpeter play taps.
Not a word was ever spoken until it was done and the town suffered a moment of silence in memory of those who had given their lives for us.
And so it should always be. 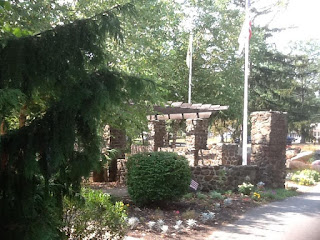 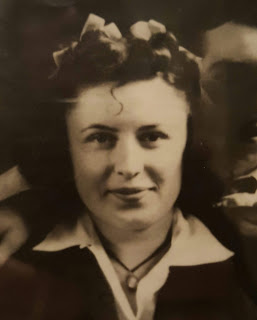 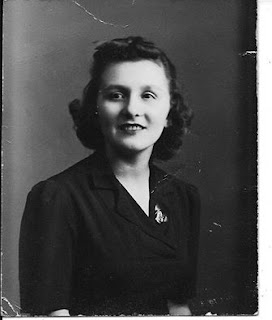 I love my mom.
I learned so much from her, but there were certain things she couldn't teach me. For those things, I had to rely on others. My teachers, first and foremost, taught me the things in school that got me through it. Outside of the Daisy Gets Her Period thing, all the rest was academic. And Mom had already taught me those details.
But there were scout leaders, who were kind and did all the scout things...what I remember most was how to set a table and how not to enjoy sleeping in the woods with 20 other "girls".
And then there was Marge. The lady in the first photo was my best friend's mother. I spent a great deal of time within her sphere and am grateful for it.
Margie was more worldly than my own mother, or at least she appeared to be.
She had a rough, smoker's voice and a huge heart. She confided in me simple things, her thoughts, her observations on life, her dislikes and likes. Sometimes, she even admitted to her fears, though they were few.
She loved her kids and her husband, but she also loved herself. Her confidence was mindboggling. When she walked into a room, you actually felt her presence and that was just the way she wanted it. Her penchant for wearing red and black clothing, her height aided by the highest heels available...her silver hair piled high atop her head...she was quite impressive and she knew it.
And she used it.
I think people were cowed by her mere presence. She exuded confidence. No one intimidated her. She took charge.
This is what she passed on to me. Margie never hid her light under any bushel.
But she was plagued with illness...and from the operations and the horrible results from them, she lost her grip on her mighty self. While it is easy to see how she self-medicated the pain and the unhappiness, it is just as much a great shame that she could no longer be the woman she had once been.
It hurt us all to witness her decline. There were times when the old Margie would come back, but the shadow of long suppressed fears and the pain pills and alcohol took their toll. Her world became clouded and eventually, she lost the fight she once had.
She died an ugly death, by herself in the family home, found by her husband and a stranger. (But that's another ugly story.)
Thank you, Margie, for all you gave me and all you taught me. You were a terrific second mother to me and I will never forget you.
I hope you are at peace.

Someone (Lisa Verge Higgins) just posted a quote from JM Barrie's Peter Pan...it was remembered by a literary agent I have met, but that means nothing. It's the quote that's important.

The moment you doubt whether you can fly, you cease forever to be able to do it.

Now, if you remember anything about Peter Pan, whether it is Mary Martin winging around the nursery room or the animated Disney guy or any of the other versions of Peter (we will discount that horrible live version with Christopher Walken as Hook) you know that Peter is getting the Darling children to fly with him to Neverland. He has Tinkerbelle reluctantly sprinkle them with pixie dust and they think lovely thoughts and up they whoosh!

It would be pretty terrific to be able to fly, except if one happened to be acrophobic. But let's just assume one is NOT acrophobic.

Flying free, able to go anywhere under one's own power, above the crowds, beyond the rainbow or Big Ben, to a wonderful place where there are Indians and pirates and lost boys and mermaids and underground houses to keep one safe from crocodiles and nasty pirates! Yeah

However, there really isn't a Neverland, except the ones we create in our minds and transfer to the pages of a book. Our story. Our book. Our Neverland.

And the very moment we think we can't fly, we drop like stones.

I can fly. At this moment, I don't particularly feel like flying, but I still believe I can and I will, when I want to.
The trick is never stopping to believe.