Well, I am glad to say that Dead Meat is finished.  All it needs is a cover and away we go.

This is the sequel or second part to my Dead Guys trilogy.
I've had it with vampires being heroes.  They're not nice, no matter how you might make them out to be.  If they are nice, they aren't vampires.

So, my hero is a lignarius, a vampire disposer.  Slayer and hunter and killer have been overused and right away people think he's the bad guy, when in reality, he's the good guy!  His own parents were victims of vampires...his father was killed by one and his mother, grief stricken beyond sense, killed herself, leaving Jim Ryan on his own at a young age.
Luckily, his father was in the military in Germany.  Somebody knew somebody and Jim was taken to live with Jesuits who at first thought he would become one of them. But his anger ran too deep for him to be a priest.  Instead, he was trained to be a lignarius (Latin for carpenter or one who fixes things) whose job it is to rid the world of vampires.  He is one of a long line of people who performed this job and he is really good at it.

In the first novella, he disposes of a female vampire then meets her twin sister, who is not a vampire.  He is attracted to her in a way he does not understand because Jim is a virgin, not because it is part of his job restriction, it is something he thought was part of it.  Turns out, his job does not require physical as well as mental purity.

Jim falls in love immediately with the vampire's sister.  Love gives enemies hostages, though, something Jim has never felt before, never experiences before.

He is in love, though, and willing to do whatever it takes to win her heart.

Even if he is The Lignarius.

Further adventures soon in Dead Meat, to be followed by Still Dead by next year.
Posted by Irene at 3:32 PM No comments:

We spent two days on Long Beach Island.  The lower half got hit hard by the most recent storm, Sandy.  Many, many houses were destroyed or damaged beyond repair.  I have photos of some of them but will have to get them from husband's camera.

This is a postcard from the upper part of the island, a long time ago.  This is where the bonfire was lit to celebrate V-J day. Keep that in mind for my next book. 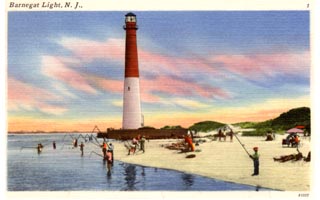 A bit more from Dead Meat.

Hell.  Another mess to clean up.  This one would have to be reported to the police.  It was a good thing he’d already presented himself to them and they were aware of his business in their fair city.  They would clean it up about the driver as best they could, keep the press from getting nosy, making sure no one at the hotel got curious. But if the poor man was married, had a family…it wasn’t his business…others handled that.


His sole purpose was disposing of vampires.


Others took care of legal.


Someone higher up took care of the family in some way, should it be necessary.


Somebody else got rid of the dead meat.
Posted by Irene at 8:13 AM No comments: