Karyn Hijacks her Mother's Blog to Talk About Cartoons and Empowerment

You might be aware of this cartoon show, Steven Universe, that airs on Cartoon Network. It involves a magical race of sentient stones called Gems who appear as women of all different shapes, sizes, colors, and backgrounds. This has captured my heart, as a fat woman in her late 20s. For the first time ever, I have seen a character in a show who is fat portrayed as beautiful and well-loved. Rose Quartz, who is all at once a mother, a fierce warrior, a rebel, a savior, a healer, who understands and loves humans but who is also confused by them every step of the way, betrayed her home planet to defend the Earth from invasion and colonization thousands of years ago. She eventually fell in love with a human man named Greg, and after working hard to understand and love each other, they had a son named Steven. Giving birth to Steven effectively ended Rose's life, but she wanted him to live and love on Earth as a human being--something she valued incredibly. Rose is eight feet tall. Rose is portayed as huge in all respects--she looks soft and strong simultaneously. Her hair is a mountain of billowing pink curls. She radiates love. She is flawed and complex and spectacular.

The thing that has captured me about Steven Universe is the incredible diversity in the characters. Each of the gems we meet is wildly different from the next. There are short, hefty gems like Amethyst, who was created on Earth and is half as tall but just as charismatic as other gems of her same class. There is Garnet, a fusion gem who is both stoic and emotional, brave and frightened, secretive and open. Pearl is a former servant who was at one time a total renegade--political rebel and intergalactic outlaw. On Earth, she is motherly, anxiety-ridden, and uptight. We see soldiers, like Jasper, and technicians like Peridot. Each Gem is, if you forgive the pun, multi-faceted. They have flaws and prejudices to overcome. They have weaknesses and strengths. They feel limited, not good enough, and scared at times. At others, they feel invincible and cunning. Chances are, there is someone like you on Steven Universe. Even if there isn't someone like you, there could be. Steven Universe is a show in which you, the person you are right now, could very well exist. You, with your fears and you foibles, your ugliness and your beauty--you could exist in this world.

Rose Quartz is someone I like to think I have a few things in common with, but she's not me. She made choices I don't know if I would make. She said things I don't know if I would say. But a Gem like me could exist, because a Gem a little bit like me already does. When I was growing up, I fell in love with the show Sailor Moon because there were so many girls on it who were super heroes! And they were realistic--they got scared sometimes! They had to pull themselves together! There was even one girl, Sailor Jupiter, who couldn't find a uniform that would fit her at her new school. I couldn't find shit to fit me when I was growing up. Granted, it was because Jupiter was too tall, which isn't the same as being fat, but I didn't really have any chubby characters to look up to as a little plus-sized girl crying in the JC Penney's junior section. Everyone on Sailor Moon was beautiful--pale skin, slender, with long legs and perfect hair. It was easy to identify with their characteristics, but not so much with their appearances. With Steven Universe, the human occupants of the town are incredibly diverse in all ways, and the magical girls are just as diverse. I couldn't exist in Sailor Moon, not really. But I could live in Steven's world. In his universe. Someone like me could be something special.

Checking out my face in the mirror this morning, I was startled and alarmed to see a 1/4 inch long black hair sprouting from the side of my upper lip.
To my horror, I reached for my trusty tweezers, prepared to pluck it, get rid of the ugliness...like that's all I need. Black hairs growing out of my face, right where people can see them!
Well, people like me, probably one of the only people who looks at my face.

I stepped away from the mirror, heartbroken.
Yes, it had come to this. Hairs growing on my face where they didn't belong.

Any small hope I had possessed of a trace of the face I used to wear...gone.

Were there more? Was this the first of a plague of uglies that would guarantee old age and lack of face pride?

I did step back toward the mirror. After all, I am very nearsighted and a sink's distance away is a foot too much. Grasping that tweezer in my right hand, I leaned in to examine the gross hair.

And blew it away with my breath!

It proved to be an eyelash!

On this date, according to the way-back machine of my memory for history, William Henry Harrison, ol' Tippecanoe, became president of the United States. He was a war hero and a territorial administrator and knew what it meant to be president, right when the country was starting to fall apart by halfsies due to differences of opinion north and south.

But he also knew how to have a good time,  apparently.

After giving a two hour inaugural speech in the freezing cold, coatless and hatless so that the people could get a good look at the man he was, he went on to attend three inaugural balls and dance the night away.

A month later, he was dead from pneumonia and we got our first Vice President President, John Tyler.

Originally, inaugurations were held in the spring, early March when the weather was supposed to be better. Warmer. Less likely to rain. (It wasn't April, after all.)

But it didn't work out that way. Ol' Tippecanoe crapped out on us.

He probably would have been an apt president, back when things were a tad easier than they are now.

Ignominiously...because he was vain about his appearance and liked to party.

The word "viking" means to roam. So if you are roving around the seas and oceans of the planet, you could say you were viking. Not necessarily A Viking. Truth.
The Vikings put their deaders in boats, set them on fire and pushed the whole thing into the fjord.
No.
They didn't.
If they put every Viking who died into their boats, the fjords would be a lot shallower than they are, that's for sure!
Let me explain. Only a few Vikings actually owned boats. They took a long time to make out of very scarce wood, so it was a crap idea to dispose of the dead in a dragon boat. Only a chieftain might get shoved into the fjord on his boat if he had died in glorious battle! And I'm sure his sons and daughters regretted losing the boat!
Yes. What they did do on foreign soil was form the outline of a ship with rocks around the buried body. Sometimes. Not all the time. Vikings hung around what is modern day Sweden, Norway and Denmark. The territories were flexible, to be sure. The land available for farming in Scandinavia was little but precious. Farming around rock ship shapes would have been hard. And the Vikings were farmers first, rovers second. After the planting, in spring, they'd go out to plunder or look for more land. Their wives and thralls (they kept slaves) would take care of business on the farm.
They didn't pillage and rape constantly. They farmed. They built ships. They traded pilfered goods all over the world, practically.
The Norse made it into the Mediterranean, stopped off in Sicily, worked for the break-away Orthodox after the Great Schism as bodyguards. They took over France, most of England, Greenland, Iceland and a few parts of North America.
Now, here's something few people know: Viking chieftains had to be physically perfect. If their faces were misshapen or scarred or missing bits, they could not rule. Leadership was more or less a beauty and strength contest.
Scandinavians are not all blond with blue eyes, either. Sorry to burst that bubble!
The Valhalla business is part of their legend. A warrior died in battle, he'd go to Valhalla, which wasn't a heaven where they floated around on clouds and had a good time. Valhalla was for heroes (if you died a good death in battle you were a hero) where they would sit at long tables, eat and drink forever and fight your friends for the fun of it. Valkyries would pick up your body on the field where you fell and bring you to Valhalla where you'd be whole again (without holes leastways) and you'd eat and drink and fight forever.
If you were a Star Trek fan, the Klingons had much the same attitude about life. Going into battle was for them "a good day to die".
So it was for the Vikings, as long as the crops had been planted and your old lady was back on your land, taking care of business. 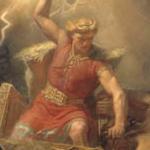 This is NOT THOR, it is Baldur. 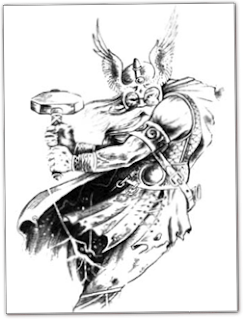 This is a Berserker, only they didn't have wings on their helmets.
Posted by Irene at 6:28 AM No comments:

Let's talk about death.
Let's go way back to my least favorite folks from antiquity: the Egyptians.
They had some strange ways of dealing with death. First of all, they figured there was an afterlife. Some of the lucky ones got mummified. Their guts and parts likely to rot were removed, jarred like we can tomatoes in August, and stuff was put into the empty cavity to dry out the flesh so it didn't rot.
Their belief was, this shell of a person, minus brain, even, would ascend on a big boat to someplace above and they'd have another cool existence there.
It got even better for pharaohs and queens. While their guts and bits were removed and jarred, they had huge tombs dug in the sand and/or (if they were really lucky) they already had tombs constructed while they were alive...you know them as pyramids.
They had their slaves killed  and slipped into the tombs to care for them in the afterlife. Their cats bought it, too. Their gold, their riches, all slipped into the sarcophagus with their mummified bodies for people to dig up later.
Oh. Yeah. About that later stuff. The kings and such who had tombs constructed by slaves over their lifetimes made sure nobody could find the way out after their bodies were put down. Everybody who worked on the construction, who knew the secret passages to get out while building...they got offed and buried along with the main corpse.
Neat. All at once. Good-bye everybody!
Well, hell.
Now, I want you all to go back and view Karloff's original The Mummy.
Sweet dreams!
Posted by Irene at 9:42 AM No comments: