The hero is a veteran who has lost the tips of his middle three fingers in the war.  As a guitar player in a big band, he's finished.  He's burned and disfigured, so he thinks, away from his movie-star good looks and promising new career in the cinema.  When he takes the hotel guest widow to hear some of his fellow musicians, he realizes what he is going to miss for the rest of his life.

“Heart Man!”
Men quickly lit their cigarettes and gathered around Lee.
“Heard what happened, man.  How ya doing?”
“Hail the hero!” Slap on the back.
“Hey, Lee, what’s cookin’?”  The drummer wiggled his sticks, hitting them against the wooden wall with machinegun rapidity.
Right back, like he hadn’t left.  Right there with the guys, his guys, only he wasn’t one of them anymore.  He laughed and nodded, turned down the offer of a cigarette, laughed and smiled and hid his hand in his pants’ pocket.
Red peeled away from the crowd, pulling Lee with him.  “We all heard, kid.  Sorry.  How bad is it?”  He puffed at a cigarette, blew the smoke into the night.
“Bad enough.  I can’t play, Red.  My left hand is shot.  No fingertips on the middle fingers.”
“Hell.  But there may be something….”
Lee turned away.  “I’ve had it.  The doctors told me there was nothing….”
Red put his hand on Lee’s shoulder.  “There are ways, kid.  Come see me.

I ought to mention somewhere how much I love The Wonderful Wizard of Oz, books, movies, what have  you.  One year, my younger daughter asked for a Wickie Witch doll for Christmas in a letter to Santa. She got it!

Why do I love these stories so much?

When I was about five or six, I went to see the movie in a theater, one of those kiddie matinee specials.  Although it was old by then, to me it was magic.  When it started off in black and white, I could not believe the world was so dull...I knew nothing about Kansas at the time, but I do believe that was probably the most accurate depiction of the state possible.  Then, suddenly, Dorothy opens that door and the world is in beautiful, vibrant color!  Knocked my socks off because I knew nothing about the story before seeing the movie...nothing, as hard as that might be for young people to understand as the movie is on television frequently now.
But back then, NO.

So I was transported to the movie Oz right along with Dorothy.
And the magic got to me, deep into my heart and soul.

In second grade, our teacher put on the play...I tried my hardest for Dorothy, sang tryouts along with the girl who did get the part up until the end.  Her mother, bless her, was willing to do the costume, curl her kid's hair, do whatever, buy ruby slippers while mine never volunteered for that stuff, don't know why. We were always supposed to make it on our own, and we did.
Disappointed as I was not to be Dorothy, I was given the plum...I was to be the Cowardly Lion.  I had all the laughs, all the drama and all the kids remembered me for years afterwards.  So, it wasn't too much of a disappointment.

Then I found a Little Golden Book about the Wizard in Oz.  Got it, didn't understand that it wasn't about the movie story.  A few years later, I found Ozma of Oz in the 6th grade library.  Because it was old and falling apart, I got to keep it.
In high school, a boyfriend found several Oz books at the local farmers' market.  I started a collection and have about twelve of the original stories, including the original Wizard book with the different illustrator, WW Denslow.  All the rest are Jno.R. Neill...he gave Oz the freakiness it needed...not too scary, not too fairytale.  Just right!

Since then, I got four reprints, including one of Ozma, which had been thrown away by my mother years ago, in pieces.  My husband bought me the pop-up book.  Someone gave me four blown glass tree ornaments.

But every year when I hear the opening strains of The Wonderful Wizard of Oz, I look for Judy Garland and Bert Lahr, Ray Bolger and Jack Haley, eager to see if they melt Margaret Hamilton and win the day.
They always do. 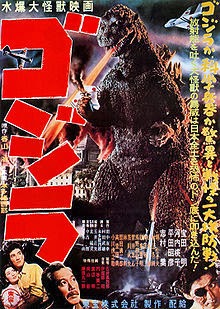 Last night my family left me to my own devices.  Television was pretty awful, reruns and even rerun aliens, so I started surfing and, what to my surprise, I found a Japanese Monster movie...Godzilla vs. Mechagodzilla.
I had seen the really old Mechagodzilla movies but this one, lucky for me, was new for me.  It was made in 1996, but somehow, it slipped away from me.

Of course it was campy. Of course it was silly in parts.  Of course there is a tall, well built good-looking guy and a sweet girl but they never got together.  I wondered about that. Never in these movies, even when, as in the original, the girl is engaged to the hero, there is no hand-holding or what have you, no affection other than perhaps a look and some inappropriate dialogue between the two characters.

Now, considering what I have seen and heard about the Japanese male propensity for pornography, this seems quite the reverse.  Anti-porn.
Maybe it is exactly that. Maybe these movies are intended for children.  If that is the case, and the Japanese folks and censors don't want kids seeing affection between men and women (or anything else other than a baby monster) how do these kids grow up to be gung-ho about pornography?

Another question to ponder into the night.

But this was a fun movie and it lasted until almost midnight when the wayward family started coming home.

My life is full.

Last week, we took a drive up the Jersey coast to see how things have improved or not yet been fixed nearly a year after Hurricane or super storm Sandy.  It hurt to see the wiped out houses, the dune-less beaches, the businesses that remain closed.  There are signs of things being fixed.  The houses on the beach are pretty much repaired because there is money there.  The street that was wiped clean in Holgate remained empty.  I'd say at least one third of the businesses are closed, apparently never to reopen.
But the boardwalk at Seaside...that was up and running and packed with people!

The boards were humming, the people were laughing and carrying their prizes, eating pizza, slurping frozen custard cones, messing themselves with cotton candy.  It was alive, though the southern half did not have rides open and the northern half had rides, but not all of them back.

Now, after yesterday's fire. it's all gone from the southern end.

My heart bleeds for the owners of the concessions...having rebuilt once, now to have to try all over again.  I doubt most of them will think it is worthwhile.

Funny thing, I was trying to picture all the stalls and remembered that the psychic had a little booth down that end.  I wonder if she bothered to rebuilt, knowing what was going to happen in a few months. 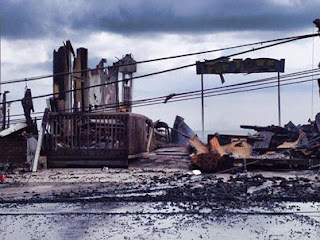 Putting together the pieces

Okay, so I'm on vacation and doing what I vowed to do...make the timeline out of all the various scenes for Mermaid Arms that have been written over the course of the past four or five years.
Well, I finished putting the various parts into the timeline.
Now what I have to figure out is what is missing.

I have to write the black moment.  The hero and heroine have just had an almost date. He has met up with some of his musician friends and since he has failed to figure out a way to play the guitar again, he's feeling very sorry for himself.
She's just been out on an almost date for the first time since her husband died...she's cautious, but feeling rather happy because she's been around people and had a highball or two and she's walking back to the hotel in the dark with a man, a difficult but generally nice man.