A mineral is not a gem, necessarily

A program about what we've forgotten about history had a short story about how American forces did battle with nazi ( I do not capitalize that word) soldiers six months before we entered the war with the bombing of Pearl Harbor.  It seems that we had men stationed in Greenland protecting the cryolite mine there after the nazis invaded Denmark. Since Greenland would have made a delicious place for the bad guys to settle and eventually get into Canada and the US, the same people who refused to have a blackout along the East Coast to prevent U-boats from blowing up freighters there were brilliant enough to try to protect the cryolite mines.

Cryolite is essential in breaking down Bauxite, from which Aluminum is made, or something like that.

So...story goes that we (US) sent Coast Guard ships to find these Germans supposedly hiding away at a new weather station in Greenland. Only they were not to be found. As luck would have it, the soldiers and Coast Guardsmen managed to find a Norwegian fishing boat, boarded it and found the seamen were nazis in disguise who immediately ratted out the location of the weather station. It was Hitler's idea, and probably rightly so, that if they caught the weather in Greenland that would eventually arrive in Europe, they could plot their air strikes and battles better. Makes sense...armies still depend on weather forecasts so they don't end up trying to, oh, invade Russia in winter, stuff like that.

Anyway, cool. They get the fake fishermen who rat out the German guys who are sent packing and we have access to the cryolite mines all to ourselves and our allies.

Only, the supply is limited. It runs out eventually and they have to make fake cryolite to deal with the Bauxite problem. The mines closed down entirely by 1990.

Why I write this is because it is something I never heard about and thought was pretty cool. Next time you grab your Reynolds Wrap, think about Greenland and give them a nod of respect.
Posted by Irene at 1:56 PM No comments: 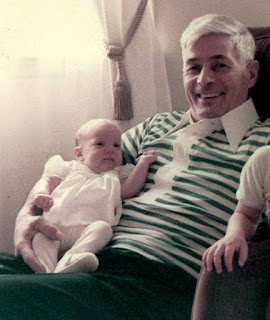 My Dad with my niece Cara...this must have been in 1975 or so. That smile was magnetic!

Ghost in the Sand

Seaside Heights and Park were towns that formed a great deal of my childhood. I didn't live at the Jersey Shore, but I sure wanted to. And I took advantage of every vacation spent there and, once I was old enough, I drove down there myself with Sandy.
There were very few places to "go" and "have fun" and "meet guys" in our central NJ life back in the 60s. In my home town, there was NOTHING to keep one entertained. The small park in my back yard was good for ice skating and watching kids sneak smokes where their parents couldn't see them, but as for doing anything...well...if you get something out of standing around with a few kids you don't really know, then I guess some people could call that fun.
But going down the shore! Now, nothing could beat that! During the day there was the ocean to get pounded by waves in and crabbing and getting a terrible sunburn. At night, there was the boardwalk and the incredible adventures to be had there.
The boards smelled of creosote. The air was redolent with the aromas of pizza and sausages and peppers and onions. Kohrs had the ice cream. The fun house had this idiotic laughing lady in a glass window and she screamed this obnoxious laugh far into the night. There was music coming from the Chatterbox night club and thousands of teenagers milling around the stretch of boards. And the steam organ music of the carousels...and the candy stands and wheel games. I'm lost in these memories!
Over the ocean hung a sliver of moon, highlighting the white cresting waves. The sound of them crashing against the sand was a subtle beatbox base to our lives.
That was a long time ago.
When we drove through yesterday, we were dismayed to see half of the boardwalk gone. Yes, we witnessed how they worked to fix it after the hurricane. We saw the skeleton of the roller coaster clinging hopelessly to the sand as it was beaten by the waves. But we saw our governor reassuring us that it would be back! Everything would be back, and the building started and the boardwalk was laid and then what was left of Seaside Park faced the indignity of a fire that took away so many shops and restaurants and memories.
The people who had those shops have chosen, apparently, not to rebuild. Seaside Park boardwalk is just that--a boardwalk. One arcade, the one closest to Seaside Heights, remains, and a restaurant has been built at the very end. Other than these establishments, there is nothing. Like the gaps in a seven year old's teeth, even though you love the kid, the lack of teeth makes them pretty ugly.
So is my Seaside.
The Heights side was bustling, but different. Parking has been left to a central machine that prints out a tag for you and takes your money...something like two bucks for half an hour. Who the hell spends only half an hour on the Boardwalk? Nobody. Nobody. My guess is that the parking revenue is to be used to pay for rebuilding my memories.
Well, it can't. The whole feel of the Jersey Shore is gone for me. That longing to be there is gone. My childhood and teenage years have been eradicated completely. Not one slice of pizza, not one dripping cone of Kohrs can do anything but remind me that everything about the shore, this part of the shore, MY part of the shore, is gone. For years and years, just going there made me happy. Everything happily remained the same.
And now it's gone.
I feel vaguely hollow. 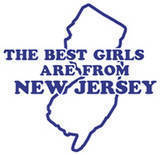 My grandmother on my mother's side was a major factor in my life. She was always there, offering strange advice and folklore, never listening to anything we told her, cleaning like a madwoman, farming...you name it. She also bought me every winter coat I ever got until I was married. She loved her great grandchildren. She mellowed as she got older, then she got sick and her personality disappeared.

She told me once that she would love to go to the American Museum of Natural History in New York. Several times we planned the day, door to door service, no subways or cabs involved, but she always found something to stand in the way.

So, she never got there.

She died at some age in her 90s. In her life, she had lived in Ukraine in a hut with a dirt floor. She moved to the Red Shanties in Northampton, PA that at least had a real outhouse, not just a trek out to the back yard where one did one's business. She knew how to kill chickens, steal goose eggs right out from under the goose, sew awnings and make pirohi like a champ.

But she never got to do the one thing she longed to do.

There is a valid lesson to be had here.
Posted by Irene at 7:21 AM No comments: