Do you want to dance?

Taken from Dancin' in the Dark--

“Dancing in the dark...” with strings and full orchestra and no vocalist...just lovely music and Dennis.


“I hope you can keep up, little girl.” He stepped into the rhythm as he pulled her close, so close she felt every hard plane of his magnificent body. His arms held her tight as his legs moved. Elegant. She fell into the music, led by him, the way real people danced, the way it was supposed to be, only close, so close she could actually feel his heart beating.


He smelled like English Leather. He moved with power. Grace. Like a lion. Like a pro. Together they covered the dance floor with such ease, moving as one being, so close, so very close, so thrillingly close Carly found herself transported. Somewhere else, not the garish Italian-American hall, but maybe a movie set. Maybe even in a different time.


And it was pure magic. Sensual as they slid along each other’s bodies, as his hand moved up her naked back so lightly, so powerfully, so tenderly she made no protest, no thought other than that she wanted to dance like this forever. In his arms. No missteps. No stumbles. He led, she followed, just the way it should be.


The floor emptied quietly. People stole to their seats, watching the dancers, smiles on their faces that Carly could see as they passed by in a whirl.

Having majored in English and History, I had to read a great deal.  From medieval drivel to stuff from very long dead poets, to Shakespeare and Milton, then over to American writers.  Took me hours every day to go through all the reading I had to do, leaving little time for pleasure reads.
Then, one day in an American lit class, I got to read Harvey.  Even better, I saw the movie with Jimmy Stewart.  In my opinion, it is the quintessential play with the quintessential actor and, or course, the quintessential pooka, Harvey. 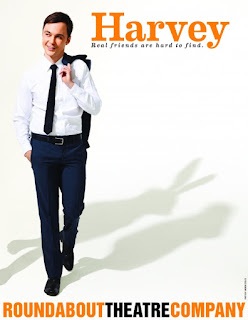 Now, to my utter delight, this:
Posted by Irene at 9:41 AM No comments: 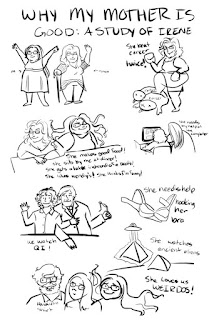 At last, a tribute to me!  Karyn, who also did the cover for Dancin' in the Dark, made this in honor of me.  Some of the sections are a  little obscure to the general public, but I think all can benefit from what she thinks of me as her mother.

Elyse who does not draw, chose a card for me that suggested the benefits of spinning around on my butt...there's a lovely Labrador Retriever on the cover, so you get what that means.

They both want a dog.

Happy Mother's Day to all you mothers out there!  Live long and prosper in the light of your childrens' eyes.
Posted by Irene at 8:11 AM No comments:

Carroll Shelby passed away this Thursday.  He was one of the great men of auto racing and producing.  He created the Cobra and the Shelby Mustang.
I don't know why this is important to me, but it is.  With all the celebrities in this world, this quiet man deserved accolades though few people outside the automobile world recognized him.

I think he was very cool. Guest Blog Over at Nathan's

Today I'm guest blogging over at Nathan Rudy's blog.
This isn't your normal how to write or be published type blog, it's about my favorite movie star--Godzilla--and how the monster changed the world.

Nathan was kind enough to host me...you can view it here:
http://nathanrudy.com

If you know me at all, you know that I have a penchant for the unusual, but while I like reading and watching television shows about UFOs, Aliens, geology and other educational subjects, my very favorite movie to watch is one featuring a Japanese movie monster. I love the rubber suits, the fake cities they get to destroy, the little kids who know the monsters better than their parents and all grown-ups.  I get a real kick out of the military that is so ineffective it hurts and the different ways a monster can be resurrected.

But this blog is semi-serious.  It isn't every day you come face to face with a monster...or is it?

I do not know how long Nathan's blog will be up, but if it should be covered over, you can always go to the little calendar he has on the side and click on May 9, 2012 and I'll be there.  (I have the oddest feeling I've misspelled calendar.)
Posted by Irene at 2:37 PM No comments: