At last, the Hollywood connection!!

Remember the scene in King Kong, the original, not this latest or the one before that or the one before that, but the first, the 1933 version? Okay, the party from the ship lands on Skull Island...Armstrong, the captain (so he can talk to the natives), the hero and Fay Wray. They creep up the beach to see what's going on. The natives are dancing around in front of this giant wall.
The crew from the ship hides behind a clump of weeds to watch.

They witness the natives bowing and scraping while six guys wearing fur on their arms and head shuck and jive in a circle on a dance platform in front of the chief and his buddies.

They get caught. The natives are pissed and that's where the real story begins.

Well, my Hollywood connection comes with the dancer who, in a closer up shot, dips his arms, then raises them...the only one with a full shot where you see the costume.

Yep, that's ol' Uncle Boris. On my mother's side, I think, but who can really say? He's legend in the family.

Moved to the West Coast right after landing on Ellis Island, made his way painfully west doing odd jobs like ditch digging and waiting on tables...inching his way to Hollywoodland. He'd been fascinated by moving pictures in the Old Country and was determined to be a movie star.

Only one problem. He was kinda funny looking. No leading man roles for him, but he was Rondo Hatton's stand-in in several movies after this one time shot in King Kong.

I think, out of all my fake relatives, I like this one the best. He was determined to be in the movies and well, he made it.
Dreams do come true for those who try.
https://www.youtube.com/watch?v=A0mYbCDicOQ
Posted by Irene at 5:27 AM No comments:

The bad thing about thinking

This morning I remembered what it was like to undergo treatment for lymphoma with chemotherapy.
I sat in a comfortable reclining chair. The nurse pushed aside my sweater to gain access to the port that is still in my body a few inches away from my heart. There is a tube of some kind that extends to my neck and some vein I don't remember there. A big one. Sometimes after all this time, the nurses that flush this port can't get any blood from it, which makes me wonder if it has sealed up. I'd like it out, but that would require surgery and I do not want to go under anesthesia again.

The poison dripped through me. Sometimes I could feel it burning. Sometimes, like the very first time, I could feel it tingling in my pubic region. It was unpleasant, but I stuck it out.
After that very first time, I got terribly sick and vomited into the toilet at home. Herb wouldn't let me stay in the hospital after undergoing a poison drip for 13 hours because he was afraid I'd catch some OTHER disease. So I came home and puked my brains out.
The next day, I got some medicine that relieved the nausea and vomiting. I got it every month because we had good insurance coverage. I doubt I could get it again as it cost about $900 a dose.

I met some nice people every 15 days when I got my treatments. I would just start regaining my sense of taste when I'd lose it all over again. Some nice people came to visit me and brought me flowers and chocolates which I could not eat.
I lost 70 lbs. I have since found most of it again.

People, family, friends, acquaintances, the ladies at the pharmacy...my doctors and nurses...all were wonderful to me. I can never thank them enough for all the kindnesses they bestowed on me.

But I cried this morning as I remembered the pain. Your bones ache. Your insides ache. You have little normal senses...things stink or they taste like straw or your body stinks or heats up and burns or freezes, sometimes all at once. You fight. You cry more. You lose your hair, your flesh hangs from your body, you get a tan, you can barely move some days.
And nobody, nobody who has not undergone chemotherapy the exact same way you have--nobody bloody understands what you are going through.

So I cried at memories.
I didn't want to cry, nor did I want to remember.

I do know what I would not wish this on my worst enemy. Ever.
Posted by Irene at 5:55 PM No comments:

A few days ago, while feeling particularly sorry for myself, I jotted down all the things wrong with me, physically, that is. Every single little twitch and pain and unnormal thing that's been bothering me.
The list is quite long, and I didn't even mention those biggies that I've been dragging along with me that probably are the causes of these little pains in the butt.

I won't list them here.
There are FIFTEEN things.

Probably, they can be written off with reference to my advancing age and the chemotherapy that saved my life but knocked me for a loop.

But they're all there, annoying me, holding me back, causing me pain and preventing me from living a happy life.

Next Friday, St. Patrick's Day, is the first day of the Liberty States Fiction Writers' conference.
I don't do much there...but I did get my hair done so I wouldn't look like a bag lady. The way I figure it, bag ladies are too poor to have their hair done, using whatever funds they may have to sustain themselves with food, etc.
So, I got it done by my friend Debbie. She pulls strands of hair through holes in a little tight fitting cap on my head and bleaches the hell out of it. 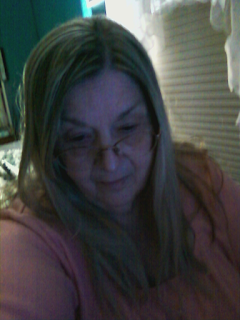 Yes, this is the best selfie I have ever taken. Karyn said it is terrible. I think it's rather complimentary!
Posted by Irene at 4:31 PM No comments:

There comes a time when every single bit of energy and patience--mostly patience--is drained from one's body.
There's a scene in an old movie, Jason and the Argonauts, when on the island of Talos, the giant awakens when someone takes a javelin (actually a pin from a broach) from a tomb/temple. Talos is one of the Titans, only he is a giant bronze statue on top of the tomb.
The men from the Argos have been warned not to take anything but food and water from the island.  So, when one of the dudes, I believe it is Herakles, walks off with this pin he thinks to use as a javelin, the mighty giant comes to some sort of bronze life and goes after the guys from the ship.
Jason--mind you, he's a sort of hero in charge of the search for the Golden Fleece--realizes he can't fight the statue which towers over everyone and everything. But he's clever. He's been told by Hera to look to the giant's ankles. No, this isn't about Achilles, though we all know what was wrong with his ankles. This is about Jason and his need to defeat the bronze Ray Harryheusen Titan.
He scrambles between Talos's bronze sandals and sees a round screw-in plug. After great grunting and exertion, Jason opens up the plug and out pours a river of reddish goo. This stuff is what has powered the living statue and eventually, once it is drained sufficiently, the statue crashes and becomes immobile. The remaining crew of the Argos get back on the ship, except for one young fellow.
Herakles, feeling bad that it was his fault the giant awakened and the rampage happens and this one young guy is missing, decides to remain on the island and search for the kid, thus leaving the crew to carry on to Colcos for the fleece.
Down one hero.
But what I'm referring to mostly is how the huge, mighty bronze colossus gets all the goo drained from it and becomes immobile.
That's me. I am Talos.
I think I need some alone time.
Now.

https://www.youtube.com/watch?v=SNg4KZKG96o
Posted by Irene at 5:14 PM No comments: